The creating process of the Bureau of Cultural Heritage, Ministry of Culture, was in itself the representation of  Taiwan’s cultural heritage preservation development. In 1981, the Council for Cultural Affairs, Executive Yuan, was established and the "Cultural Heritage Preservation Act"was promulgated and implemented in the following year. This was the demarcation line of Taiwan’s preservation history. Prior to this major political and legality change, the survey of Taiwan’s historical monuments, during the Japanese colonial period, was based on the "Historical Spot, Scenic Beauty and Natural Monument Preservation Law" and on the "Antiquities Preservation Act," after the Nationalist government came to Taiwan. In 1982, the above-mentioned "Cultural Heritage Preservation Act"was promulgated and implemented, which not only established the institution and its policies for cultural heritage preservation, but also launched an unprecedented new dimension for the preservation of cultural heritage in Taiwan.The CHPA was revised five times because of the subsequent social, economic and environmental changes. In 2005, the governing authorities over cultural heritage management were integrated into one, that is, except for the administration of the natural landscape, which was under the jurisdiction of the Council of Agriculture, Executive Yuan, all the remaining six categories 8 items of the cultural heritage management were governed by the Council for Cultural Affairs, Executive Yuan. 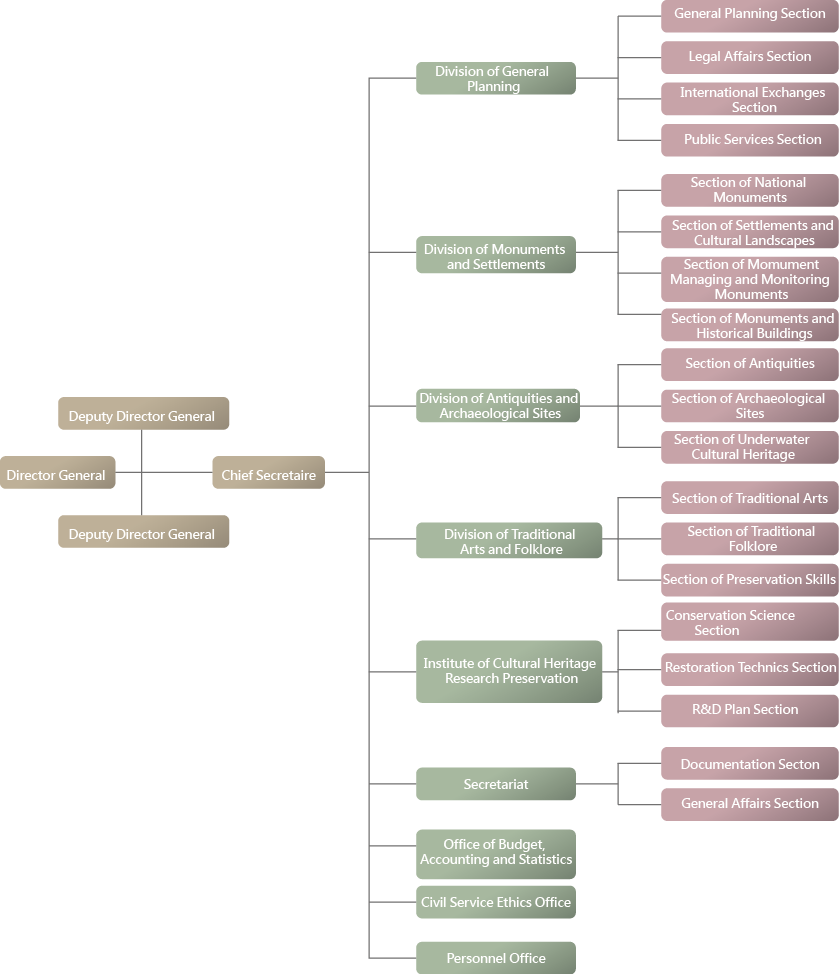 Organization Chart
1.The Bureau of Cultural Heritage, Ministry of Culture(BOCH) is led by 4 principal officers, including our Director General, two Deputy Director Generals, and Chief Secretary.
2.Our organization is composed of the following branches:
(1)4 divisions and 1 institute, including: Division of General Planning, Division of Monuments and Settlements, Division of Antiquities and Archaeological Sites, Division of Traditional Arts and Folklore, and Institute of Cultural Heritage Preservation Research.
(2)Staff units, including: Secretariat, Accounting and Statistics Office, Civil Service Ethics Office, and Personnel Office.

The Bureau of Cultural Heritage is responsible for preserving and restoring historic buildings, sites, communities, relics and cultural landscapes, as well as conserving Taiwan’s traditional arts, folk culture, and other cultural legacies.

Among the Bureau’s various programs are the promotion of international exchanges on intangible cultural assets, the hosting of workshops and training for heritage-related professionals, and assistance to local governments in planning and establishing preservation areas.

The Bureau also operates a cultural heritage preservation research center in the southern city of Tainan, which has a restoration research room, a laboratory, a library and several study rooms. The center is located in the same building as the National Museum of Taiwan Literature.

In recent years, the Bureau has been focusing on developing techniques and applied research on the preservation of local cultural heritage. It has set up an exchange platform for collaborative heritage restoration among academic institutions in Taiwan, and it also provides other cultural heritage management institutions with scientific tests, consultation and assistance.

The Bureau aims to improve preservation and restoration techniques in Taiwan by developing necessary technology, equipment and expertise. An additional objective is to integrate relevant research results and turn them into digital content for broader use.

Alt+U：Upper block, containing the links to the services of this site, search box, font size setting and versions of this site.